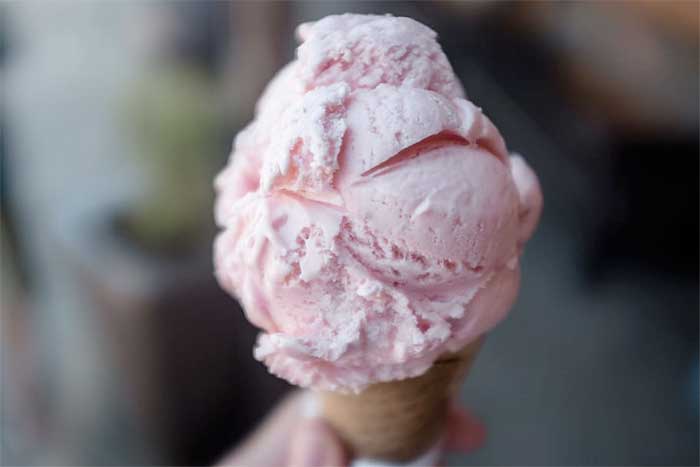 I don’t know if they have teaberry ice cream Ethan Allen’s time, but Vermont residents playing this as their favorite flavor. This is another regional flavor that can be hard to five although it is available commercially from makers like Turkey Hill.

Although when researching different states favorite ice cream flavors the article I found on teaberry ice cream said that this is only available in new England, that’s not the case. At least one fervent Pennsylvania resident says tea berry ice cream favorite in his area. As for me, nestled here in Sun Valley, CA, this is a flavor we have never seen nor heard of.

Frozen Jose Mier loves finding out about new and obscure flavors. And though this isn’t as exotic as, say, black sesame ice cream, or superman ice cream, it’s one I’ve never heard of before and what is berry you may ask? Well, it’s a fairy but it doesn’t really have Berry flavor. Nor does it have a tea flavor. People describe it as close to Wintergreen. Still other say it tastes like Pepto-Bismol. Those that love the flavor really love it. Not having tasted it myself I actually look forward to it. I think the wintergreen flavor would make a nice cool treat especially on these hot summer days that we’re going through right now.

As I say it is available commercially, but it’s always fun to whip up a batch of your own homemade ice cream. I found a recipe on this website for this distinctive flavor. The one ingredient that you’ll need tea berry extract. You’ll probably need to be a big fan to Gary ice cream two want To go out and hunt for he extra. However, as I think about it, just about everything is available on Amazon.com so it shouldn’t be too hard to get a hold of.

If, like me, thought of tasting obscure ice cream flavors appeals to you then I strongly suggest you give this a try. You’ll be joining most of Vermont residence, and a bunch of Pennsylvania natives who absolutely love this flavor.