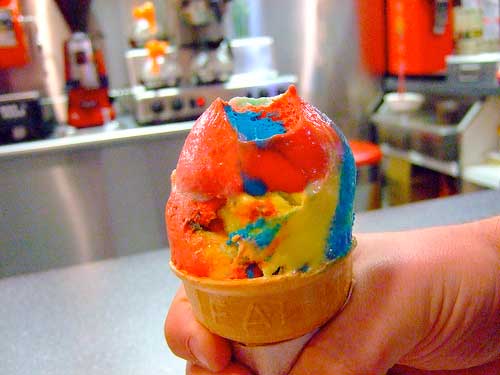 If you’re not from the Midwest, chances are this “flavor” of ice cream is as new to you as it was to me when I discovered it. It’s brightly colored using the same colors as those found in Superman’s costume: red, yellow and blue.

I once had a similar “rainbow” ice cream in a shop in a Las Vegas hotel and remember it being very good.

Whatever the origins and whatever the flavor, this ice cream should be on your ice cream to do list. Being out on the West Coast, we probably won’t have the opportunity to buy it at the local ice cream shop, but we can make it ourselves (or a facsimile thereof) which is why I am including one man’s home version. It may not be the “real” thing but it suffices.

Superman ice cream delights on several levels, engaging both taste and sight. The bright colors stand out (just like Superman himself) and the mix of three distinct flavors will fascinate your tastebuds.

The blue moon is something about which I’ll have to write more later because it’s so intriguing. One of the great parts of bringing these different frozen desserts to you is that in the course of my research I find so many regional delights that most of us have never heard of.

So, the next time you’re in the mood for ice cream or a unique frozen dessert, try Superman ice cream. And if you’re not in the Midwest, try making some yourself.

It gets the Jose Mier seal of approval!

← Jose Mier and Some Hokey Pokey From Down Under Once in a Blue Moon: Jose Mier Discovers Blue Moon Ice Cream →