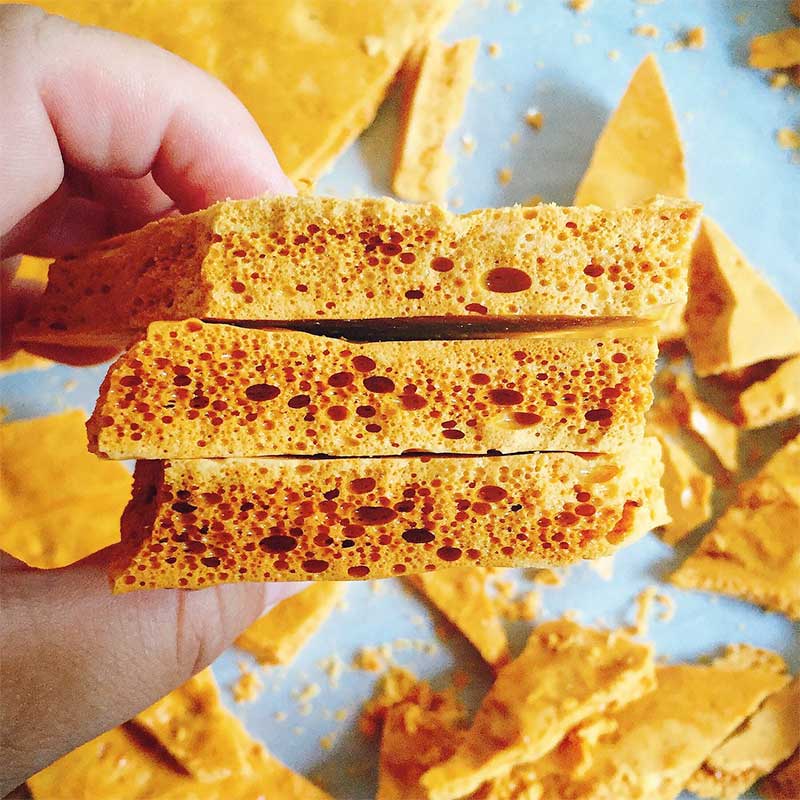 Jose Mier writing once more from the depths of my freezer. As I try to bring you more and more interesting frozen desserts and as I explore all the varieties of ice cream I can find I’m astounded at some of the ancillary things I unearth during my searches.

Case in point: hokey pokey ice cream. What is this, you may ask? Basically it’s a vanilla ice cream with the addition of hard, crunchy bits of honeycomb. Not the dripping, sticky, juicy honeycomb you may see when you think of the word. No, this is not the creation of bees but rather a crunchy candy version that can be broken up and added very nicely to an ice cream base.

Apparently this ice cream flavor is now specific to New Zealand, however on researching the flavor, Wikipedia tells me that “hokey pokey” was a slang term in general for any type of ice cream and was in use around the world in the nineteenth century and early part of the twentieth century. Whether the legends are true or not it was said to come from Italian ice cream vendors called hokey-pokey mean who would sing to promote their ice cream. Wikipedia references a 1930s song about Hokey Pokey ice cream. The name may also be a dervation of hocus-pocus or from the Italian “oh che poco.”

We may never know, but we can certainly try this flavor. A search on Google reveals you can’t easily purchase it here in the U.S. (and I did say it was a New Zealand treat) so if you want some you’ll have to make it yourself. There are several recipes online so give it a try. If you can’t find the crunchy honeycomb candy, try making some yourself. The effort will be well worth it and it will be an appreciation of the foods and desserts of different countries and cultures.