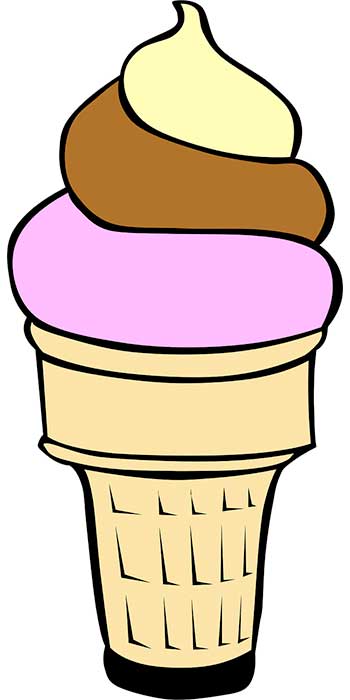 Frozen Jose Mier here. I don’t know if I believe it or not but according to Taste of Home, each State of the Union has its own favorite (or most popular) flavor of ice cream and my State, California seems to go for Neapolitan ice cream. Yes, really.

Now where I live, in Sun Valley, CA, there are ice cream or frozen yogurt shops within easy walking or driving distance and toi be honest none of them serves Neapolitan ice cream. We have some wacky, wild and unique flavors to choose from (although I don’t see Superman ice cream on any lists) but Neapolitan seems timid and lackluster by comparison. That’s why I was surprised by Taste of Home’s report. Maybe it’s my Left Coast sensibilities and I’ve been blinded by all the individual and new flavors around the world. I would have guessed Californian’s would have gone for something like green tea ice cream or something more recent like cookie dough or cookies and cream. I was wrong.

But then perhaps it says something about us, that we’re not all seeing the next big thing or strange or outlandish flavor. Maybe our collective love for Neapolitan signifies that deep down we’re really looking for stability. The known over the novel. Perhaps someone could do a psychological study on why we chose the flavors we do.

As I wrote yesterday, Americans love more and even though Neapolitan is more staid than other flavors, there’s an aspect of abundance about it. After all it’s not really one but a combination of three flavors: strawberry, vanilla and chocolate. Just one scoop contains all the flavors you’d find in a banana split. So, even if you take a little taste you’re helping yourself to a trifecta of flavors. And while it may say that Californian’s are more traditional than first thought it also says we like a little bit of excess in our single scoop.

While the neighborhood ice cream parlor may not serve it up, it’s always available at the supermarket and no doubt that’s where Californians pick it up. However, it’s not hard to make it yourself and the freshness of homemade ice cream is mostly always better and more satisfying. Want to try it? Check out this recipe from Food Network.

From Los Angeles to Redding, it seems like us Californians seek a little bit of tradition in our desserts and just the right amount of excess!

← To The Top! (Of Your Ice Cream) How About Some Dioscorea Alata Ice Cream? →