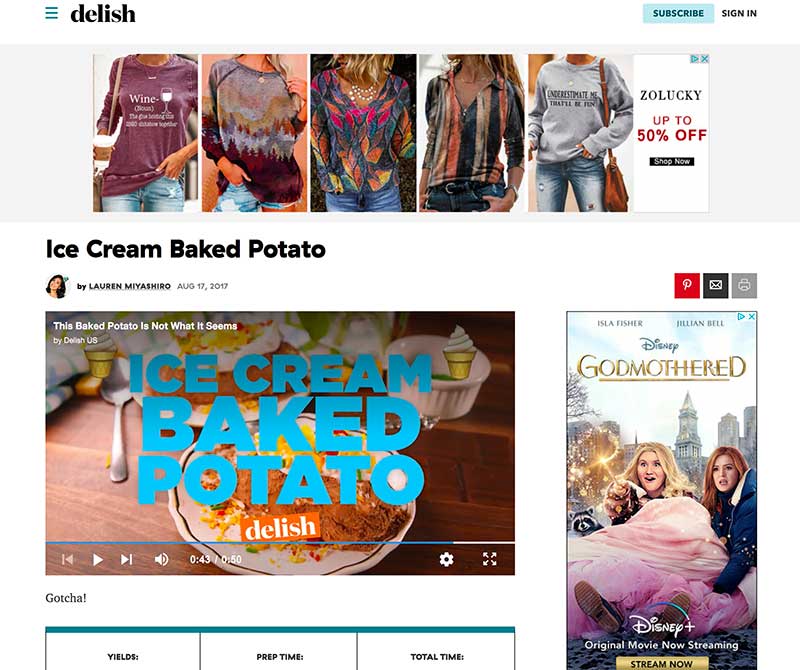 Frozen Jose Mier has written about some impressive desserts but nothing to date compares to this latest find: an ice cream baked potato. When you read that line you’re probably going to feel like me start scratching your head. This is another treasure which just happens to be from delish.com once again. When I saw the photo and the caption, “ice cream baked potato,” I have to admit I was not originally too impressed. To me it looked like ice cream or whipped topping on top of a potato. Their visual trick certainly worked on me.

There are actually no potatoes in this desert and everything is either ice cream, a candy of some sort or whipped topping. The key to making these potatoes is to use scoops of ice cream that you put into plastic wrap and shape into the shape of potato which you then freeze for a couple hours. The potato skin is actually cocoa powder and it really does look like the brown skin of a russet potato.

Instead of sour cream the top this potato we have Cool Whip. In place of bacon, chopped red licorice is used. Cheddar cheese is actually just shredded coconut with yellow food coloring. Chives here are green candy sprinkles and a yellow starburst fruit chew is used in place of a pat of butter. This is the kind of dessert that will impress anyone and if there’re expecting dessert only to be met with a potato on their plate the delight will be multiplied when the actually bite into it.

This is so visually impressive that it’s going to bring smiles to the faces of adults and kids alike. I think it’s one of the most unique desserts I’ve ever seen and I’m certainly going to give it a try myself.

This is definitely not something I’m going to find at my local Sun Valley ice cream parlor but rather it’s a special treat that gets made at home—and it’s really not difficult. Give it a try and let me know what you think.

One Reply on “Frozen Jose Mier With a Most Imaginative Dessert”