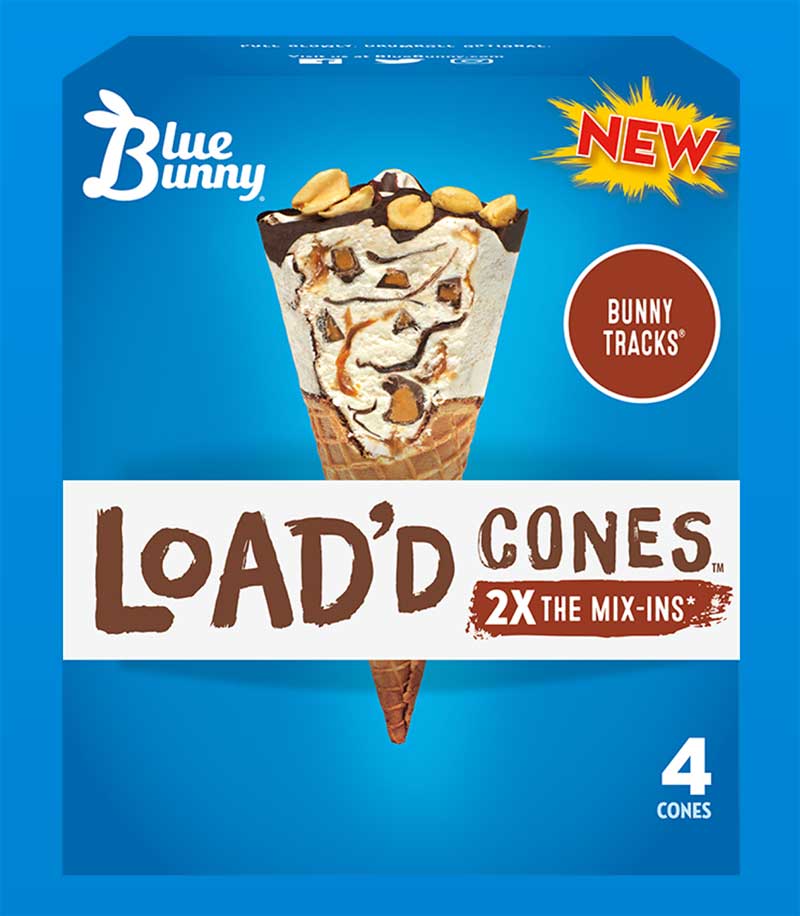 Jose Mier again. As a food service industry professional I work with a lot of frozen items. I have to admit, however, that the frozen dessert items are my favorite. I’m lucky. I get to taste just about everything we work with. And while there are a tremendous amount of fancy frozen dessert recipes, there’s something that brings out the pure-kid-joy in me when we’re talking about prepackaged treats. I’ve got to say, I really like—no, love—so many of the treats made by Blue Bunny.

I’m no shill for the company even though I deal in Blue Bunny products. I’m just saying they really do make some darned good stuff. They make so many varieties that I can’t possibly list them all here. I’m just going to jump right into one of my all time favorites: Load’d Cones. Specifically, Bunny Tracks!

We all grew up with the same set of pre-packaged frozen treats. Some were memorable and some not. Snow cones that stayed for a while in the grocer’s freezer section were usually one rock hard block when you bought them. Similarly, drumstick cones ended up being a bit flabby when you actually got down to the cone part (until some GENIUS figured out how to line the inside of the cones with chocolate!).

Then came the Load’d Cones. You’ve seen then everywhere by now. One big continuous cone (the shape of the whole treat, not just the base) of cone + ice cream + topping. Ingenious! I love the shape and it makes it easier to start eating because the ice cream comes to a point (the outer rim) facilitating that first bite.

Of course I like many different flavors, but Blue Bunny has one I really enjoy called Bunny Tracks. This flavor is an example of something being greater than the whole of its parts. Vanilla mixed with chocolate coated peanuts, caramel, fudge swirls AND chocolate peanut butter bunnies! Actual little rabbits! I love it. Okay, so the rabbits are gimmicky, I still think it’s a great idea. I like chocolate ice cream but I’m kind of a purist and go for vanilla as a base and then add what you will. In this case it all works beautifully together.

As an aside, the Blue Bunny company goes back to 1913 when founder Fred Wells bought a horse, some cans and a wagon from a local dairy farmer. Later in 1935 they held a contest to pcik a new name for the company and somebody came up with Blue Bunny. The guy even sent them his own logo design. They went with the name and the lucky person got $25 as a prize.

The company has expanded over the years but is still based in Le Mars, Iowa which is called the Ice Cream Capital of the World.

← Yay for ice cream! The Simplicity of Sorbet →